One of our blasting projects was at a cotton mill recently converted into town homes.  The home owner desired to blast interior brick walls, and old beams removing many layers of paint.   This town home had finished hardwood floors so protecting the finished interior was important.  Neighbors were living on both sides of walls being blasted and a finished town home was located bellow.   This project took 6 business days but when the job was over the homeowner was ecstatic with the new look of her home.   The old historic brick was exposed and the beams were clean and free of paint.   Because of Alabama Dustless Blasting extensive containment system neighbors were unaffected by vapor media blasting.

With Alabama Dustless Blasting we can contain all media and contaminants.   We have developed trade secrets to protect your home and adjacent properties.

Do not damage brick with chemicals or dry sandblasting.  Soda is not effective on brick.  Vapor Media blasting is efficient and clean.

Blasting to remove paint is the most common reason to blast concrete.  Paint may be removed even if it is several layers deep.  Media Blasting of any kind will leave your subsurface with a "tooth".  This is good for both preventing a slippery surface during wet conditions, and if you are planning on sealing or repainting.

Dustless Vapor Blasting, to etch finished concrete, is another popular reason to blast.  Sometimes a homeowner or general contractor needs more aggregate or pea gravel exposed.  Alabama Dustless Blasting can remove the top layer of cement leaving more stone or rock showing.   This too will leave a more textured surface as opposed to a slick finish.

As always when Alabama Dustless Blasting completes a project,  containment and clean up are very important.  We dispose of all media and debris in a responsible manner.   Past customers will vouch for our professionalism before, during, and after the job.

Painted or stained stone can easily and efficiently be restored to new condition.   Stacked stone columns can have their dullness removed to look clean and bright.

Tile Pool Copings, especially if Granite,  can be vapor blasted.   Alabama Dustless Blasting completed a job for a pool contractor where the granite deck around the pool was to slippery.  Our company came in, blasted the granite, and left the owner with a more desirable finish.  The entire process took one day.  Pool tile can also develop calcium deposits.  Dustless Media Blasting can remove calcium deposits from pool tile.

Whether we are blasting your entire pool surface or stack stoned columns Alabama Dustless Blasting always performs a thorough clean up. 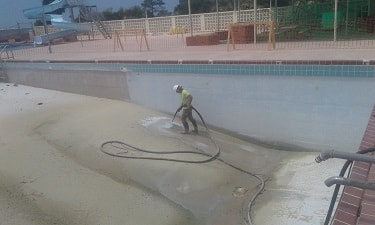 ​This spring Alabama Dustless Blasting blasted a concrete ( Gunite Pool ) swimming pool that had 4000 square foot of blasting surface.  Several coats of paint were removed leaving the concrete exposed and ready for re coat.   All used crushed glass media was collected and disposed of properly.    The project lasted 4 days and the owner was very happy with the results.

Concrete swimming pools need to be re coated from time to time.   Removing the existing coat with dustless blasting is always a smart move.  Do not apply a new and expensive paint or coating over old flaking material.   Allow Alabama Dustless Blasting to come in and help with renovation of your pool.   We will complete the project right the first time.
SEE PICS OF ABOVE PROJECT IN THE GALLERY!

Alabama Dustless Blasting can resolve your smoke damaged brick problems.   Many times, after a fire, the house can be salvaged.   Homeowners and General Contractors have partnered with our company to handle the cleaning of smoke damaged brick.  Whether your brick is interior or exterior Alabama Dustless Blasting can make your brick look better than ever.

One of Alabama Dustless Blasting's jobs in 2018 we were able to blast the smoke damaged fireplace, as well as the entire front of the house (500sf approximately), all in one day.  The brick turned out better than the day the brick masons laid it.  This helped in the resale of the house once finished.